Week 2, Home Health & Back to the Hospital

Today we started Week 2 of treatment, so again we were up early and headed back downtown before 7am. Drew was still feeling pretty bad and vomited about 5 minutes into our drive. We got him cleaned up and since he was feeling nauseous, I was hoping that he wouldn't be asking for food or anything to drink. He's not allowed to eat or drink on these mornings because he has to be sedated for the spinal treatments. He was okay in the car, but after getting to the hospital and vomiting 3 or 4 times, he started asking for water. And by asking I mean begging, crying and screaming and then just pleading with us nonstop for a drink of water. Once the hitting, kicking and scratching started, they moved us up in the schedule and got him done.

Since he was having such a hard time keeping anything down, they were contemplating keeping him hospitalized overnight and starting IV nutrition. He had lost 3.5lbs over the first week (which is 10% of his body weight). Randy and I just cringed at the thought of having to make him stay in the hospital again, but of course want to make sure he is safe and properly cared for. Luckily we were able to make a plan to have home health come to the house and get him started on IV fluids overnight and then to start IV nutrition at home tomorrow. Since we are leaving his port accessed, that means we will also be able to do his medications IV too.

After Drew's treatment, we went back up to the clinic to see his doctor and while we were in the waiting room, we saw some friends of ours from church. Not exactly the place you expect to run into someone you know. These family friends of ours went through this same experience 8 years ago when their then 5 year old son Brian was diagnosed with a brain tumor. He also had surgery and treatment that lasted 17 months and was now just coming in for his annual check up. What a support they have been to us. Brian was here at the same hospital with the same doctors and team that we are working with. For the last year, Randy has actually been Brian's Sunday School teacher at church also. Drew sat quietly and listened as we visited and talked about Brian's experience and watched as he and his mom said hi to all the nurses that they knew. I think he felt comforted to know that someone we know had been here too. He then carefully eyed Brian as he started digging through the treasure box of toys that was in the room and pulled out a football. Next thing I knew, Drew was up and digging through the treasure box himself (after rejecting almost every toy that was presented to him earlier) in search of a football. He found one! 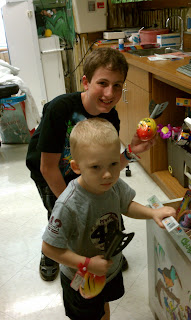 Brian and Drew with their footballs.

Things have been going much smoother with Drew's medications since we are able to give them through IV. He still gets upset when we have to give them because the saline that is used to flush his line gives him a really bad taste in his mouth. 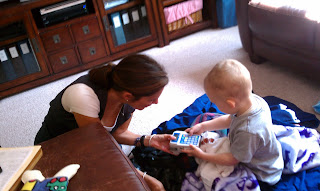 Our home health nurse came again to help us get things set up to start Drew's IV nutrition tonight. She is really good and Drew actually warmed up to her and was smiling and laughing with her. Here she is showing him his very own special pump that is used to give him his "muscle milk".

This morning started out great. It was Randy's birthday. Drew got his IV nutrition overnight, hadn't vomited since noon the day before, actually ate a muffin and some hard boiled egg and was up and playing a little bit. Then around 1pm he was acting really tired and just wanted to be held. He started acting really cranky and around 4pm we noticed that he was feeling a little warm. When you leave the hospital while undergoing chemotherapy, you are given very specific guidelines as far as what to watch for and a fever is one of them. If he has a fever of 100.5F twice in 24 hours or a fever of 101F once, then we are to go to the hospital. The concerns is that if their white blood cell count is low (which is what is expected 7-10 days after receiving a round of chemo) and they get any sort of infection it could be really serious. Well around 4pm when we took his temp it was 99.4F, then 100.3F. Then around 7pm when we rechecked it, his temp was 101.2F, so back to the hospital we went. They drew blood to check his white count and to do blood cultures to check for any infection. His white count was low, specifically the absolute neutrophil count (ANC), so he was admitted and started on IV antibiotics. Now we just wait and make sure the fever is coming down and nothing is growing on the cultures and make sure his ANC is coming up and then we can go home, but that could take a while.
Posted by Debbie and Ryan at 1:28 PM