Back to the Fever Routine

We spent all day last Friday at the Day Hospital getting platelets and a blood transfusion. Brooke didn't have school, so she decided to come with. They had fun painting and playing games. 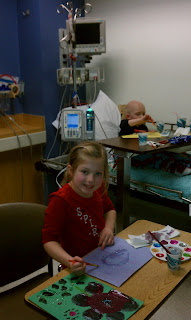 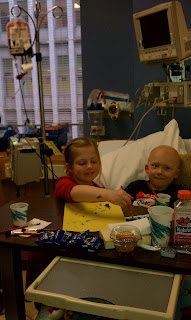 Saturday morning around 6am, Drew got a fever so off we went to the ER. By the time we got things packed up and arranged for the kids at home, we made it to the hospital at 11am. We spent the next 8 hours doing the usual ER routine and waiting for a bed upstairs to be admitted because he was neutropenic (0 neutrophils - the specific infection fighting white blood cells). The usual ER routine includes: drawing labs to check his counts (we knew his hemoglobin and platelets would be ok b/c he just received those the day before, but we also knew that his white count was bottoming out being 10 days post chemo), drawing blood for cultures to make sure he doesn't have an infection in his blood, starting IV fluids to help replace fluid lost due to having a fever, starting IV antibiotics and checking blood pressures every 5-15 minutes for an hour b/c if he did have an infection, starting the antibiotics could cause his blood pressure to drop in which case they would send him to the PICU. 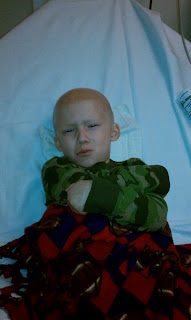 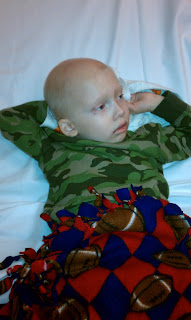 We were able to get him some Tylenol around 5pm which helped with his fever and made him much more comfortable. We finally got a room at 7pm and got settled for the night.

Since he had a runny nose and a lingering cough from the last couple of weeks, we were put in isolation, which means a room to ourselves!

After the nasal swab to test for RSV and Flu (both came back negative), which made for one upset boy and resulted in a nice puking session, it was a pretty uneventful stay. He never spiked another fever after that first dose of Tylenol in the ER. So after 48 hours being fever free and negative blood cultures, we loaded up on another unit of platelets and were sent home yesterday afternoon. We are all very happy to be home and next round is scheduled to start a week from tomorrow. 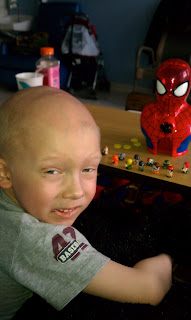 The flash kept getting him in this picture and he couldn’t keep his eyes open, but he wanted a picture of his new squinkies that kept him very entertained this trip. 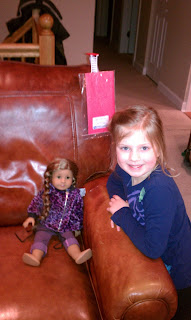 This is how play goes around our house these days. Brooke is giving her doll a blood transfusion!
Posted by Debbie and Ryan at 9:50 PM