We came home Sunday after finishing round 3 of chemo. This was one of the shortest stays we will have for chemo with what was suppossed to be only 2 nights, but ended up being 3. We had planned on going in Thursday after radiation if his counts were where they needed to be (ANC - 1000) in order to start the next round . The Monday before his ANC was back down to under 100, so we really didn't think he would be ready, but we got the lab results and his ANC was up to 750. Since he had bounced back so well and we were already delayed a week with the pneumonia, they really felt like we should get started. It was getting late in the afternoon on Thursday at this point and I was going to have to head down with Drew alone, so we made a plan to just come in early Friday morning instead. Well then our nurse practitioner called back and told us that there was one bed open on our floor right then and come Friday there were 6 scheduled admissions with no guaranteed beds. We know all too well the waiting game there at the hospital, so we decided to go in early and grab our spot. After our last admission of 11 nights, 3 nights seems like a breeze! 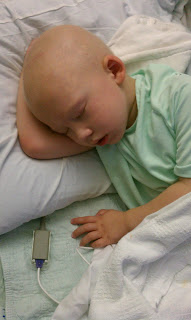 I love this picture of Drew because it reminds me of him as a baby. He even looks like he has little chubby hands (which really is probably just swelling from all the fluids running through him). He has just had to grow up way too quickly through all of this. 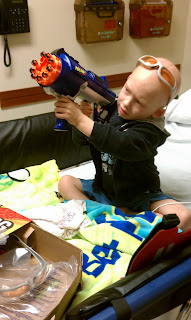 We started week 2 of radiation on Tuesday. They were closed Monday for Labor Day, so we got the day off! Yesterday Drew's nurse Annie forgot to have him pick out a toy from the treasure box, but oh boy did she make up for it today. We opened the lid and right there on top was this huge box with 2 huge shoot guns (as Drew calls them)! It's a Nerf Dart Tag set. 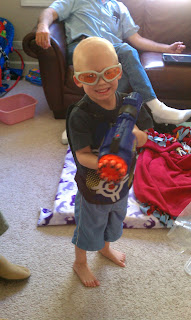 Drew had a great day today. He's still sick from the chemo, but today only vomited once and he has had an appetite all day long. He hasn't really gotten sick at all from the anesthesia everyday at radiation either. They say any negative side effects, like a sunburn type reaction at the site where the beam enters, are usually delayed 2 weeks, so next week may be more telling, but so far so good. Tomorrow he gets another dose of chemo here at home and we will check his labs to see if his counts are falling yet. We are just hoping and praying that we can get through this round without a fever or any other complications.
Posted by Debbie and Ryan at 9:28 AM