Well we are back at the hospital with a fever and neutropenia. We made it through the weekend and thought again that just maybe we could get through this round without a fever, but Sunday night it hit.

Since we are still in the middle of radiation everyday, which is so close to home, we made the attempt to try and go to our local hospital to be admitted to ease the whole transport issue. Turns out they didn't feel prepared to handle the situation and sent us down to Children's anyway. No big deal right? Well since we had gone to their ER, they wouldn't just let us leave and get in our car and drive down to Children's (like we do every other time), but instead made us be transported by ambulance. So after the SEVEN hour process, we finally made it down at 4am.

For being the middle of the night and having a fever of 103 (down from 105), Drew did great on the ambulance. The transport team was all guys which I think he enjoyed. He even rode in the back with them and let me ride up front with no problem. I think the fact that they had Spongebob on their iphone was a big influence. They even pulled out little headphones for him when he said he couldn't hear it en route because the ambulance was too loud.

He just got a blood and platelet transfusion and has been sleeping most of the day, making up for our sleepless night. I on the other hand have gotten four 2 minute naps. 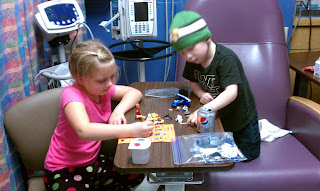 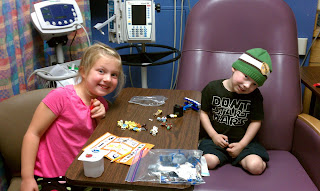 Brooke came with last week when we had to come get a platelet transfusion. For the most part they do really good together. Brooke packed her own bag of toys and snacks to take along. She made sure to bring her little lego girls because she knew Drew would want to play legos. 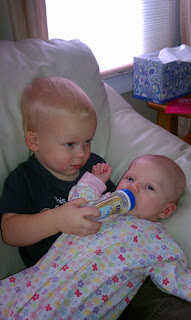 Just a pic of Dallin & Kelsey. He's always so good to her and such a good little helper. 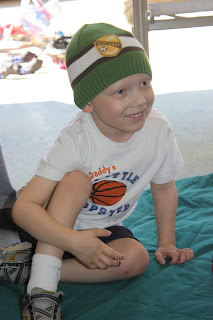 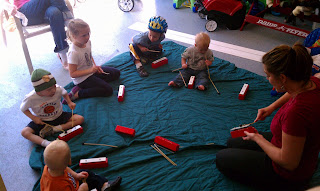 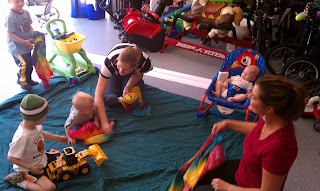 After I had Drew and went back to work and Debbie was still our babysitter, she took Blake and Drew to a Music Together class once a week when they were just 5 and 8 months old. They had the most wonderful teacher, Ms. Christy. Last week Drew was doing so well that Ms. Christy offered to come over to do a music class for the kids. We have a whole preschool class just between my kids and Debbie's alone. It was so much fun and Drew really got into it which was so good for him. He has regained so much strength being home for almost 2 weeks. Lets hope this stay is a short one.
Posted by Debbie and Ryan at 8:25 PM