I have been a bit behind with getting this post up b/c my computer totally crashed last weekend and we haven't been able to recover it. At first I felt lost without it, but then it was kind of refreshing to be away from it too, so I took a little break, but I am back up and running now!

We actually finished our 4th inpatient round of chemo last week and have been home since Thursday night. We are still in the middle of radiation, but are more than half way done. Last week the machine at radiation went down and we weren't able to be treated on Monday, Tuesday or Wednesday. We got Drew's lab results late on Monday and were surprised that his counts were good enough to get started with chemo, so when we found out that things were still down at Proton, we quickly made a plan to get chemo started on Tuesday. We only had to be transported from the hospital out to ProCure once during our inpatient stay, which was on Thursday, since things were still down on Wednesday. The interesting part is that had the machine not been back up and working on Thursday, we would have been headed to Oklahoma City for treatment! And we thought the transport from the city back out to the burbs was long! Thankfully they got things working and then they opened on Saturday to treat everyone and make up at least one of the days and the others will be next weekend or added at the end.

Drew is feeling really good and we had what felt like an almost normal day. 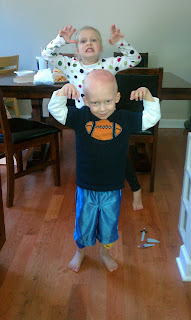 Drew was pretending to be a zombie and coming to get me and insisted that I shoot at him and he would fall over. Too many video games you think?! You can see his weapons on the floor next to him and he put zhu zhu pet armor on his shins. When Brooke saw me getting a picture, she couldn't resist getting in on the action! 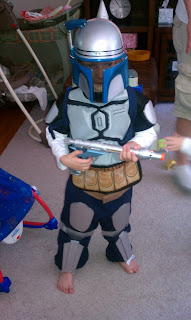 A little Halloween preview for you. Drew is so into Star Wars right now and Uncle Bruce had told him about this Boba Fett costume that he made for his son (Drew's cousin) Devon. He was pretty excited to try it on today and made sure to shoot everyone with the gun. Should we be concerned about all this "shoot gun" stuff (as Drew calls it)?
Posted by Debbie and Ryan at 10:00 AM