Sunday, April 15, 2012
Round 12 of chemo went fairly well. It was probably the most difficult time I've had getting him to the hospital though. He just did not want to go that morning! None of my secret stash of toys were helping to convince him either.
One of the chemotherapy meds that he gets, Vincristine, can't be given with his antifungals, so each time he is to receive that chemo, I have to hold his dose of antifungal for 24 hours before and 24 hours after. Since he wasn't having to get any other meds, we skipped his TPN overnight just for fun to give him a little break without his "cords" and he loved it! So much so that I think he was like, forget this, I'm not going back to that place and wouldn't get in the car.
He has not been without his port accessed for more than a couple of hours since we started chemo back in July.
He couldn't eat or drink that morning because we were scheduled for a CT with sedation to recheck his lungs and make sure things still looked good from his possible fungal pneumonia back in August. I didn't want to be late and risk them pushing us back any further since they couldn't get us in until 1pm as it was, which is a long time for a 3 year old to be NPO.
I put him in the car and he just cried (and kicked and screamed) to go back home. I pulled over before we got on the highway and finally convinced him that we could stop at Walmart and he could pick any toy he wanted - anything that would make this better for him. So I stopped at Walmart and got him out of the car and planned on just carrying him in so that we could go quickly and he could keep his face covered, but as I rounded the back of the car, I hit some uneven pavement and felt my ankle roll and then as if it was all in slow motion, I was falling. Here I had Drew in my arms and I was falling to the ground and all I could think was, "he cannot hit the ground, he cannot get hurt, he's immunocompromised, he's about to start chemo again, he cannot hit the ground." I was somehow able to roll and get under him so that he did not hit the ground, but then almost as if in a second part to the fall, I could still feel the weight of him pulling us down and all I could see was his bald head falling back to the concrete. How, I don't know, but I was able to extend my arms out and get my hands under his head so that he never touched the ground. We got up and turned back to the car and I lost it. I was a mess. Drew was fine until he saw how scarred I was and then he lost it again. We sat there sobbing and I told him that I didn't think we could go in and get a toy and he just shook his head in agreement and said ok. A nice older woman walked up and asked if we were ok, as she had seen us fall. I told her we were ok and she asked if she should call anyone. I told her we were on our way to the hospital anyway! She asked if she could get us anything to drink. I told her he couldn't eat or drink anything! Poor lady felt so helpless.
It was a very emotionally morning and we were both spent by the time we even got to the hospital. Then he had to get stuck and have his port accessed again which is always traumatic. By the time we saw his doctor, it must have been written all over our faces, because he came in the room and said, "what's the matter?" and Drew just started crying all over again. After a trip to the toy box for Drew and some ibuprofen for me, we managed to get it together.
We had to wait a long time for the CT and all Drew kept asking for was a juice box and doughnut, over and over and over again. When we finally made it over to the CT machine and they were about to sedate him, he laid his head down on my shoulder, as he usually does now, as he waits for the "white medicine" (propofol). He was really tired and I decided to ask him if he wanted to just lay down and do it awake and he shook his head yes, so I laid him down and he laid still no problem and did a great job, even with the contrast being injected which can have a funny feeling. The CT tech was great and had a very calming manner about him which helped so much. 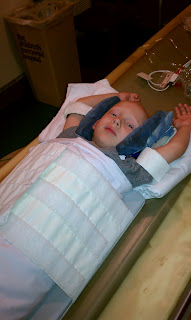 Drew must have had enough of a rest while in the CT because once he was done, he was up and ready to eat! He asked for Goldfish, Teddy Grahams and apple juice. When his nurse brought him one of each, he said, "no, 3 of each!" And I think he ate them all. Normally after not being able to eat all morning, he wakes up from anesthesia feeling too yucky to want to eat, so this was a nice change. 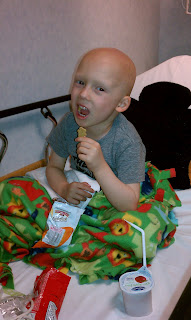 We had some visitors this round and it was a good thing because Drew was bored a lot more than usual this round and was always asking for something to do. I'm not sure how much more the nurses could put up with him running around their station shooting his guns at them. 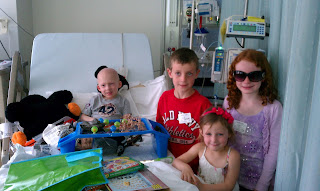 One of my best friends from high school, Gayle, was able to come down with her 3 kids to visit. 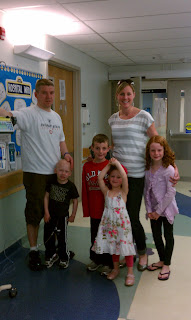 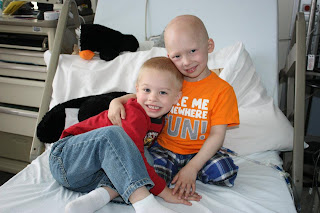 We finally remembered to get signed up for the Beads of Courage program. I am now back tracking the last 10 months to get caught up. He is going to have A LOT of beads! 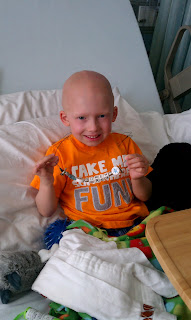 We were able to do the last 2 days of chemo for this round at home which meant we were home for Easter. 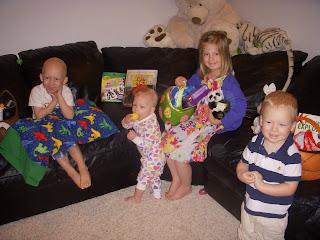 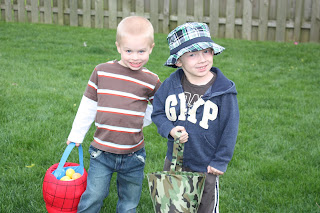 We were back for blood and platelets last Thursday and Brooke was able to come along and keep Drew company. 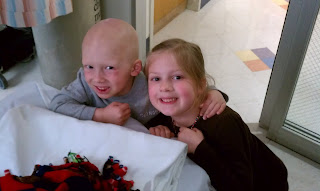 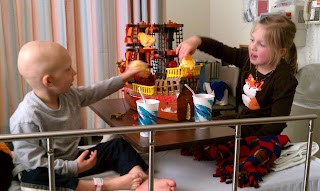 We are now on day 12 where counts are usually lowest (days 10-14) and will recheck his labs in the morning. So far no fever and we are praying he sneaks by for the second round in a row without one!
Posted by Debbie and Ryan at 10:25 PM