So they are now saying that Drew has pneumonia. They took a chest film last night and there was a spot of haziness on his right middle lung lobe. He has had mucositis (painful inflammation and ulceration of the mucous membranes lining the digestive tract) since we got here and had been coughing up a lot of mucous. The doctors are thinking that he may have aspirated some causing the pneumonia. They have added another antibiotic and an antifungal. His fever is still pretty high and he is still pretty miserable. It's very hard to stay strong during these times. I feel like the week that we had off and Drew was doing so well fueled us up for this next round, but now I feel like I'm running on empty. When the fever is gone and his white count is up, I will breathe again. 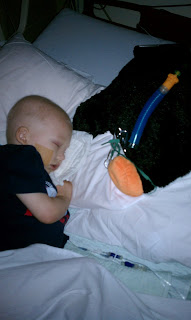 His pillow pet is wearing the oxygen mask facing out because there was no way he was going to wear it. When he was sleeping they prepped him with sticky things on his cheeks in case they needed him to wear a nasal cannula, but his O2 sat has been good, so he hasn't had to.