I think it's funny when I need to make an appointment for something (for example the AC people called and said it was time to schedule our yearly maintenance) and they ask me, "When would be a good time?". How about 48 weeks from now.

We have had a busy week. We came home from the hospital last Saturday night and had Sunday to relax a little, although Drew was still nauseous and vomiting.

Home health came and drew labs on Monday and his hemoglobin was a little low, so we went in on Tuesday for a blood transfusion. Brooke came along for the day since it was going to be a "shorter" day. She did a great job being a helpful big sister and Drew really liked having her there. 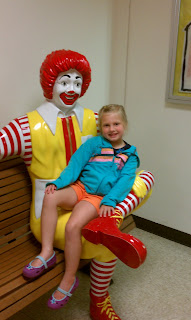 Have to visit McDonald's downstairs while at the hospital. 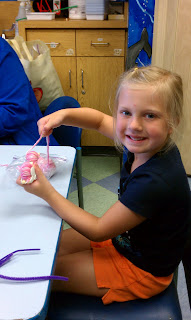 Brooke making a craft in the playroom with a volunteer. 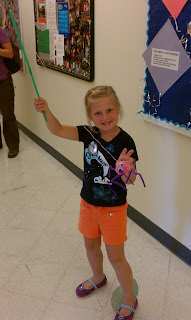 The spider she made. We went and dropped it on doctors and nurses heads to scare them. She thought that was pretty funny and we actually did scare one of the doctors pretty good! 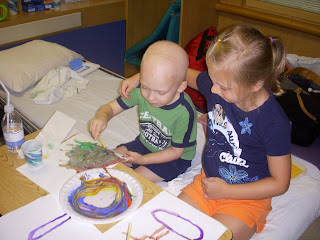 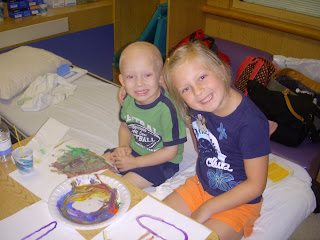 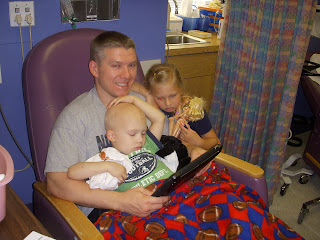 Getting blood transfusion at day hospital.


Wednesday we went and met with the radiation oncologist and Drew had his CT and sim to prepare for radiation which is supposed to start on week 7 of treatment. He had to be put under anesthesia again so that they could take an impression of his back to make a mold that he will lay in and also an impression of his face and head to make his mask that will lock his head in the exact position for each treatment. Radiation will consist of treatment 5 days a week for 6 weeks. He will be put under anesthesia each time. We feel very blessed to be able to be doing Proton Beam therapy at the new ProCure Center just minutes from our home. However, he will still continue chemo through those 6 weeks of radiation and anytime he is inpatient downtown, they will have to transport him back out for each day for radiation.

Thursday Home health Drew labs again and he received another dose of chemo at home. His labs from that morning looked okay, but he really hadn't been feeling too well since the anesthesia the day before and was vomiting more. Around 11pm his puke was dark green and when I called to let the doctor know, they told us to come in to have him looked at. So off we went to the ER. They drew labs again and by this time his white count was way down and his platelets were low. They took an abdominal radiograph to make sure there were no signs of obstruction and everything looked okay. He was dehydrated and needed a platelet transfusion so they admitted him for the night.

They finally got us a room Friday morning around 4:30am. I then left at 5:30am to go home and Randy stayed. I was able to get back around noon after getting the other 3 kids situated and now here we go again with the dreaded fever. It spiked this afternoon and with the low white count, that means antibiotics and blood cultures to make sure he doesn't have an infection and then we are here for at least 48 hours past his last fever. He has been sleeping all day and feeling pretty yucky.