July 10, 2011
Day 5 in the hospital was just miserable. Drew was feeling really sick and was so sick and tired of being there. 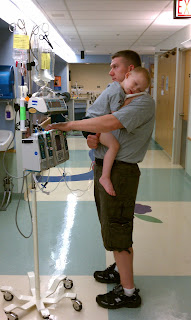 This is how we spent a lot of the day just to get out of the room and walk the halls. Since he was feeling so sick, he didn't want to walk or ride in the wagon and only wanted Randy to carry him. Good thing Randy is strong because that's not an easy task.
We knew exactly how long each medicine had to run and were counting down the minutes til we could leave. We had the bags packed and out in the car and as soon as he was disconnected we were out. We hadn't mentioned going home too much just in case something were to come up we didn't want Drew to be upset, so when I told him we were going home, I don't think he believed me at first. We made it down to the lobby and he was still very quiet as if he was wondering where we were taking him now. It wasn't until we were actually outside that I got a reaction from him and told him to yell, "Yea!" and this is what he did! 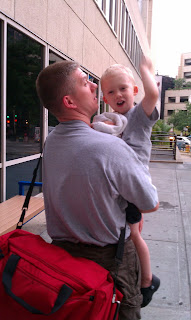 First full day home was rough. Drew was still throwing up a lot and didn't have much energy or appetite. The worst part is trying to get him to take his medication. There is no reasoning with him. We used to bribe him with candy or some other treat to get it down, but with him being so naseous, absolutely nothing works because he doesn't want anything. The home health nurse came today to give him an injection that he needed and show us how to do it. She will be able to come and draw labs at home and even give some of his chemo. She was really good and will be an excellent fit for Drew.

Second day home was a little better. Drew had a little more energy and a little more of an appetite. He actually wanted mac n cheese pizza from CiCi's and ate 1 and 1/2 pieces! Earlier he ate some mac n cheese, cheerios, goldfish, cheese crackers and cheetos. That's some diet, huh?! But at least he's eating. 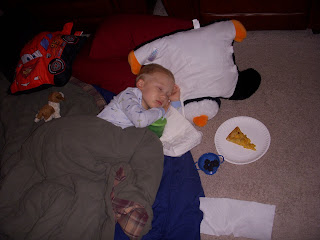 This has been his bed the last couple of days on the living room floor in front of the TV. He said he wanted another piece of pizza and then got some blackberries out of the fridge and laid down. I went to check on him and this is what I found. I think he got one blackberry down.
Week 1 done. Tomorrow starts week 2 and we head back down for another round of chemo in his spine, but should only be there for the day and then get to come home.
Posted by Debbie and Ryan at 9:12 AM