Yesterday our home health nurse came to do Drew's chemo at home and draw labs. We got the lab results back that afternoon and his platelets were low again, so they told us to come down in the morning for another platelet transfusion. We made the trip back down this morning and it was our first official visit to the "day hospital". This is where they do the outpatient chemo treatments and other outpatient treatments like these transfusions. Drew did really well there today. It may have been the different environment that helped. Instead of having to get into a hospital bed, we sat in a reclining chair with his own blanket and he never even had to take his shoes off. We left the house around 8:30am and were home by 1:30pm, which we were all very thrilled about! I don't think we've had a day that short down there since this all started.
Last week, when Drew was still in the hospital, I was making the trip back and forth at night to go home to feed the baby and Randy was staying with Drew. On Tuesday morning when I got back to the hospital, I laid down on the bed with Drew. He sat up to talk to me and there all over his pillow was his hair. They tell you about the hair loss and you know it is going to happen, but it literally did overnight. I know it is just hair and it will grow back, but it's such an emotional thing and feels like it makes such a public statement about what you're going through whether you're ready to share it or not. We've talked with him about what is happening with his hair and he sure doesn't seem to mind at this point. He was laying back on me today in the chair at the hospital and when he got up I told him it looked like a cat had been laying on me and he thought that was pretty funny. At one point, he kept wiping his face (the hair just seemed to really be everywhere today) and he said, "it's like there's spider webs all over my face!" We've always kept his hair pretty short and he's always been really good about getting his haircuts, but his hair was actually a little longer now because we couldn't cut it too short around his scar until it was healed. Now that things are pretty well healed, we thought it would be more comfortable to give him a nice buzz cut, so Debbie came over with the clippers. 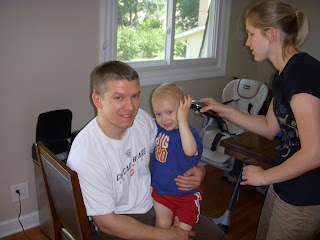 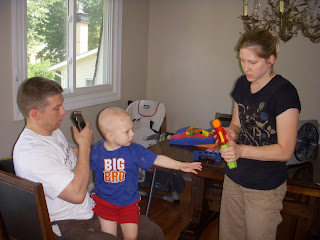