July 27, 2011
No inpatient chemo today, counts weren't high enough. However, we did get a few things accomplished.
Drew was due for another hearing test before starting this next round of chemo to make sure the meds hadn't affected his hearing last time. The last audiology test to get a baseline was done under anesthesia because we knew there was no way he would cooperate to get it done. Well this time audiology wanted to try to see if they could do the hearing test with him awake to avoid having to have him under anesthesia for so long each time. I had my doubts, but was willing to let them try (because believe me, if he's not going to cooperate, they get the picture real fast). They made his appointment for first thing in the morning at 8am. It was nice and quiet in the hospital still and we were the only ones there in audiology. We went in the room and he wasn't happy at first when she had to actually put things in his ears, but after that part was done he calmed down quickly and totally cooperated for the rest of the test and did great! He was even laughing and playing and having a good time with it. His hearing was perfect and it felt like a big accomplishment.
After we were done with audiology, we went to the clinic to have labs drawn to see if his counts were okay for chemo. His ANC (absolute neutrophil count) was still too low to start his next round of intense inpatient chemo, but since his platelets were okay we were still able to do the lumbar puncture where he gets chemo in his spine. That meant he needed anesthesia today, but without having to do the hearing test while under too, it was a very quick procedure. He woke up well and we were able to go home then.
We will have labs drawn again on Sunday and if things are okay, we will go back on Monday for the next inpatient round. In the meantime, we will continue to enjoy the next couple of days at home while Drew is feeling good. 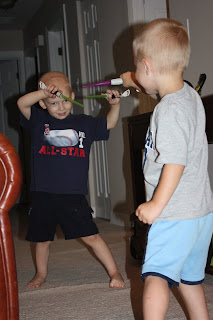 Blake & Drew got together to play.
They were quick to pull out their "light sabers" for a sword fight!
Posted by Debbie and Ryan at 10:15 AM